To receive email alerts for new posts of this blog, enter your address below.

The site was richer than any of us had seen. Do we need to revise our understanding of the potential natural biodiversity of white oak woodlands? Almost all sites we conserve and protect may be badly degraded. Our goals for management and recovery may be much too low.

The Wisconsin site, Army Lake Woodland, was recognized by botanist Dan Carter to have a substantially more diverse and conservative herbaceous community than he found anywhere else in southeastern Wisconsin, perhaps in Wisconsin as a whole. Rare conservative and other uncommon species are dense and diverse under an oak canopy that ranges from perhaps 60 to 80%. This site is now being used by the Wisconsin Department of Natural Resources (WDNR) and others to develop new oak woodland assessment tools.

The site is only about 1.6 acres and was formerly a semi-island. If this find is as important as it seems, a likely reason is that a tamarack swamp separated it from adjacent uplands, and for that reason it escaped the heavy grazing that degraded the biodiversity of most woodlands. The intervening marsh is narrow enough and flammable enough that prehistoric fires could well have spread across or jumped it. But the site has not been known to burn in recent years. The dense diversity may have been sufficient to slow the invasion by brush. But it’s small. And .3 acres of it are now a boat launch. More than half of the remainder is now brushy with a mix of invasive and possibly naturally occurring young trees and shrubs. An anticipated program of restoration management may yield additional species, knowledge, and insights. (*See Endnote 1 for the full species list, as it stands.)

Most woodlands today, if they have any quality at all, impress people who care about biodiversity by their dense displays of spring ephemeral flora. In contrast, Army Lake Woodland has a dense, diverse spring, summer, and fall flora that is principally not ephemeral. In May, the dominant vegetation includes Penn sedge, yellow stargrass, robin’s-plantain, running savanna sedge, wood betony, blue-eyed grass, low false bindweed, sky-blue aster, and wood rush. (See Endnote 2 for scientific names of species mentioned here.)

Though this important site is owned by WDNR, it was partly bulldozed in 2019 for a boat launch. An environmental assessment had focused on the presence of forked aster, a Threatened species in Wisconsin. The assessment by Dan Carter for the Southeastern Wisconsin Regional Planning Commission also emphasized the unique very-high-quality and rarity of the oak woodland community. Perhaps there was a communication failure, or perhaps the significance of such a woodland was under-appreciated.
Looking toward the future, DNR staff and others recently visited this and other sites as they considered revising the standards by which woodlands are evaluated and prioritized for biodiversity conservation. For the  draft evaluation form they worked on, see Endnote 3. There was a consensus that this was an important woods, deserving brush control and prescribed fire. 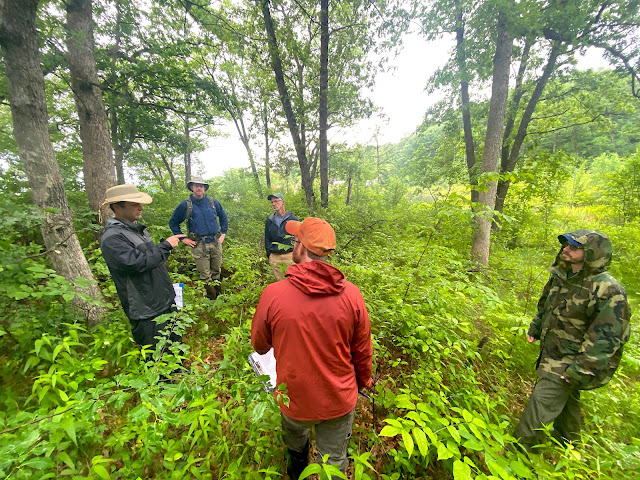 Braving a light rain, participants in the re-evaluation included, clockwise from the foreground (back view, in red) Ryan O’Conner (Inventory Coordinator, DNR), Dan Carter (The Prairie Enthusiasts), Brian Miner (Southeast Wisconsin Land Steward, The Nature Conservancy), Matt Zine (Habitat and Management Specialist, DNR), and Pete Duerkop (District Ecologist, DNR).
If you’re tempted to take a look at this site, I don’t blame you. But please don’t trample this tiny, vulnerable, precious remnant. You can pretty well see what’s important through the fence that was erected to protect it from boat launch and beach traffic. Half the island is unfenced, worth looking at, of lesser quality, and is a similar and very restorable remnant. If you have a serious reason to study the flora and can’t restrain yourself from slipping through the fence, a little fishermen’s trail runs from the fence to the east side of the island. Perhaps some people could walk carefully on that?

Considering what many perceive to be the importance of the site, this blog hopes to cover the impact of anticipated upcoming brush control, burning, and other conservation efforts.

Other views of the rich flora of Army Lake Woodland are below. 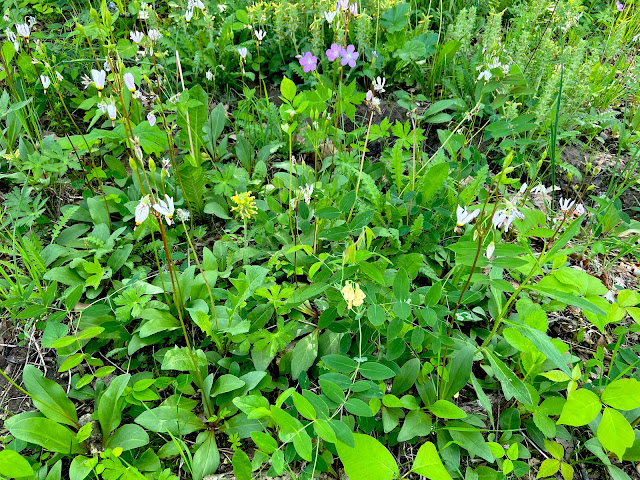 Blooming in the center of this photo is the formerly common wood pea with its cream-colored blossoms. Also in bloom here are wood betony (yellow), shooting star (white), and wild geranium (pink). 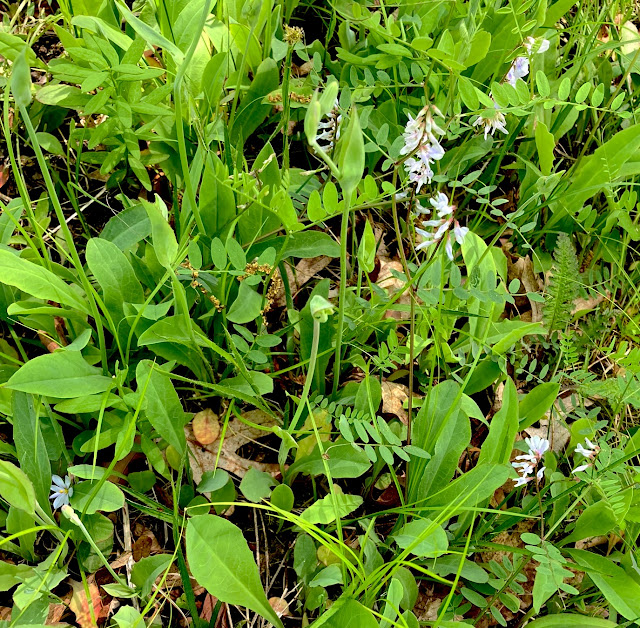 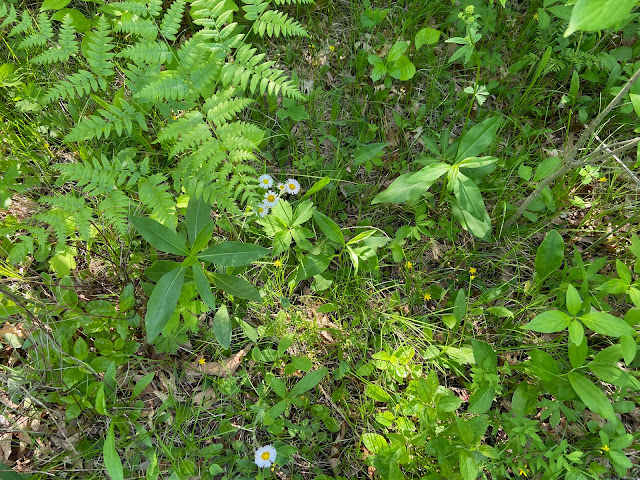 Blooming: yellow star-grass and robin’s-plantain. In bud upper right: Maryland sanicle. Identifiable by their foliage: bastard toadflax, woodland milkweed, NewJersey tea, northern hawkweed, showy goldenrod, white lettuce, false Solomon’s-seal, sedges, a white oak seedling, and bracken fern.
Note on bracken and soils: Many ecologists these days expect bracken on sandy soils, but Army Lake Woodland soil, where exposed by bulldozing, is not sandy. Sand savannas and woodland remnants are much more common than on rich soils, perhaps because invasives take over more slowly there. Soils exposed by the bulldozing at Army Lake are not sandy. The biodiversity of rich soils survived here for other reasons. 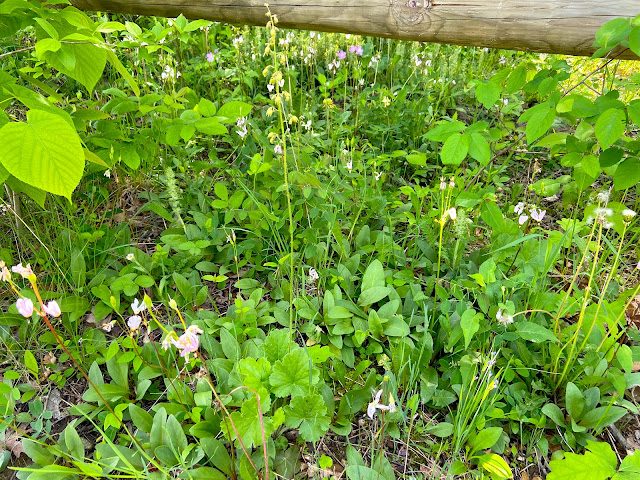 Viewed through the fence that now somewhat protects the woods are alumroot, shooting star, blue-eyed grass, wild geranium, and pale vetchling. In seed on right is a formerly-blooming dandelion; it's here because the site gets random trampling stress; it would be great to see that minimized.
More references, if you're interested
A fine presentation on savannas and woodlands by Dan Carter
In that presentation, Dan offers the summary below from Veldman et al. It summarizes characteristics of ancient grassland ecosystems from a paper that focuses principally on the tropics. But it offers principles that may apply to our less-well-studied remnants as well.

Three of the many posts on this blog that explore similar questions in Illinois remnants and restoration:
https://woodsandprairie.blogspot.com/2022/06/hypoxis-experiment-succeeds-in-ecosystem.html
https://woodsandprairie.blogspot.com/2020/10/a-celebration-of-vestal-grove-study.html
https://woodsandprairie.blogspot.com/2018/02/the-somme-prairie-grove-experiment.html
Endnote
A longer, more nuanced, and less objective account of the story of Army Lake Woods is on the companion Vestal Grove blog. That account also includes a Plant Species List as Endnote 5.
Acknowledgements
This post was written by Stephen Packard (this blog's editor) and by Dan Carter of The Prairie Enthusiasts, a highly-respected organization that acquires land, provides stewardship, and advocates for the biodiversity.
Posted by Stephen Packard at 9:21 AM